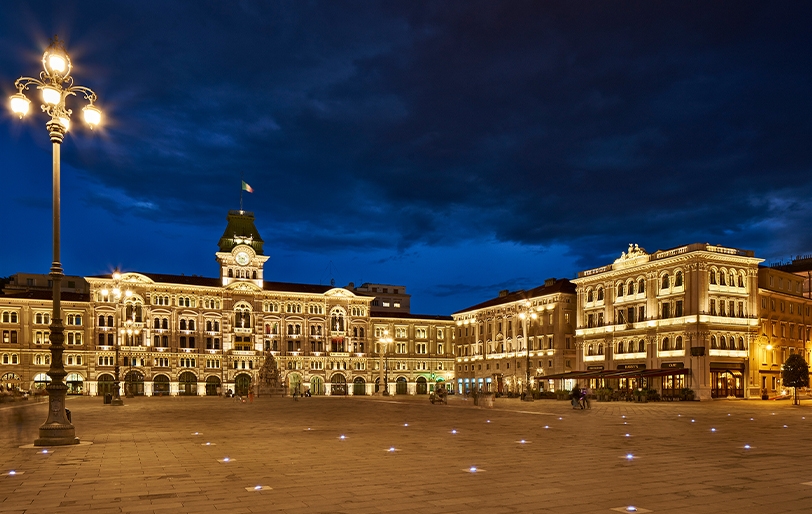 A succession of illustrious guests, celebrities, and nobles of the highest rank stayed in its rooms during the 17th century: the Archduchess Maria Maddalena d’Austria, wife of Cosimo de’ Medici Grand Duke of Tuscany (1608), the Infanta Maria Anna of Spain, wife of Ferdinand I (1631), Federico Gonzaga Duke of Mantua (1662), as well as Admiral Horatio Nelson, Queen Maria Carolina of Naples, the archeologist Johann Joachim Winckelmann, the emperors Joseph II and Leopold II, Giacomo Casanova, Carlo Goldoni, and Joachim Murat.

The project for the refurbishment of the hotel’s facades and interiors, firmed by Egidio Panzera Architect, arose from an in-depth historical and architectural study. Trieste is a Central European border town, whose somewhat dreamy light conceals the energy resulting from powerful contradictions and diversity. Located by the sea but protected by a tableland, it’s a melting pot of different cultures and religions. Its complexity has always fuelled a desire for knowledge and creativity. “Trieste has a surly grace”, wrote Saba about his town, while Schiele described it by painting its reflection in the sea, a reflection that breaks up the image into fragments, mixes its colors, and renders the complexity of Trieste.

Complexity, contrast, and reflections inspired the Grand Hotel Duchi D’Aosta project, along with the words of Giuseppe Cipriani, who cofounded the Harry’s Bar inside the hotel with his son. Speaking about the art of hospitality, he said “The number one secret to hospitality is complex simplicity.”

The restyling of the Duchi took shape from a desire to preserve the heritage of the site in a project of surgical precision that doesn’t fail, however, to introduce contemporary interpretations and design nuances that position the spaces between the past and the contemporary.
We wanted to emphasize the historical importance of its spaces through the choice of colors and materials that strengthen the hotel’s elitist nature and identity, which reached the height of its splendor during the Habsburg dominion. Precisely pertaining to Habsburg interiors, green, red, and blue were the colors selected to form the backdrop and palette of the new lobby.

Passing through the wooden doors of the original draught lobby, one is greeted by a “theatrical” space; an extravagant chandelier made from fine Venetian crystal with aquamarine tinges is the leading actor, while an iridescent rug matching the glass scrolls alludes to the ripples and colors of the Trieste sea. In a quest for new symmetry, the project redefined the geometry of the perimeter columns, clad in Red Verona marble and inlaid like the pilasters of the building’s facade, which rest on the original walnut parquet floor with brass grouts. In the background of the lobby stands the historic wooden counter, inherited from the period of Ciga management, restored to its former glory with a top made from glass fused with golden and bronze highlights, the same flickering reflections of Trieste’s lights on the sea.

Particular attention was devoted to the lighting project, managed by lighting designer Bianca Tresoldi. With extreme sophistication, the lighting tends to emphasize the architectural forms and materials.

To the right of the lobby is the exclusive Svevo room, whose walls are embellished with a red brocatel from the historic Venetian weaving mill Bevilacqua. A rug with golden highlights dictates the position of fine furnishing items, which create a conversation lounge enriched by a custom-made brass bookcase built into the room’s alcove. To the left of the lobby is the Club dei Club, a room used by the Michelin-rated restaurant, whose walls are dressed in green brocatel fabric. The gaze of the guest/spectator is captured and entertained by the “ballet dancers”— custom-made tables that appear to hover in space thanks to the soft light shining through the tulle underlying the top and swathing the central leg. The space is filled with an undertone of sensuality.
The building’s stairwell was transformed into an unconventional art gallery and an exhibition itinerary has been created around the elevator shaft and on the floor landings. The original wooden steps were preserved and restored while the landings were enriched with stretches of satin fabric to create a backdrop for the artworks comprising the temporary exhibitions held in what has become Harry’s Art Gallery.
The elevator shaft, on the other hand, is clad in local Fior di Pesco Carnico marble, the shades and patterns of which harmonize with the brass of the elevator intradoses and with the colors of the satin. Finally, as in the lobby, the aquamarine glass chandeliers are the key players of a newfound elegance. 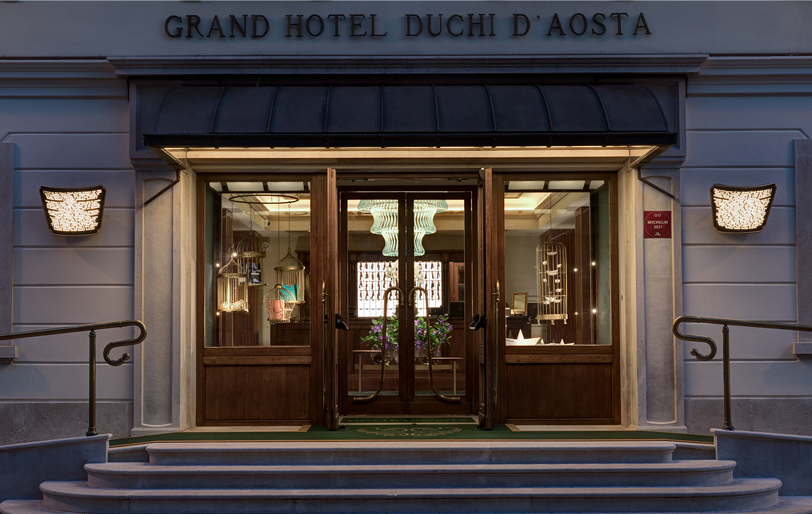 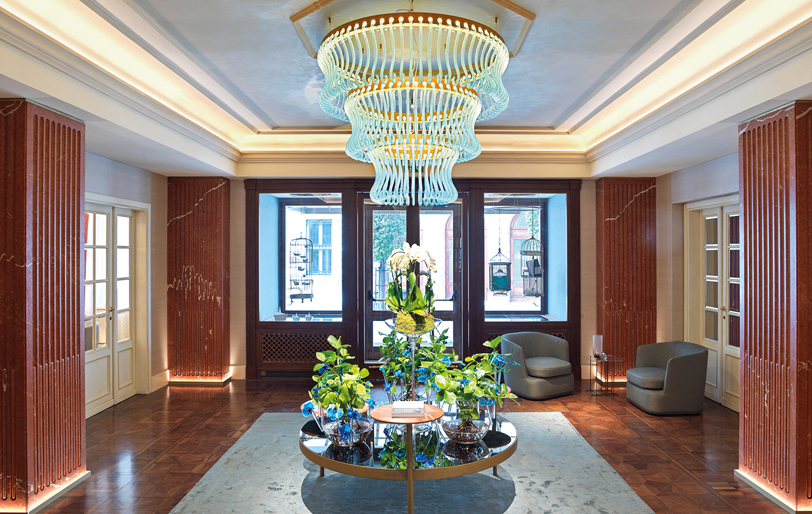 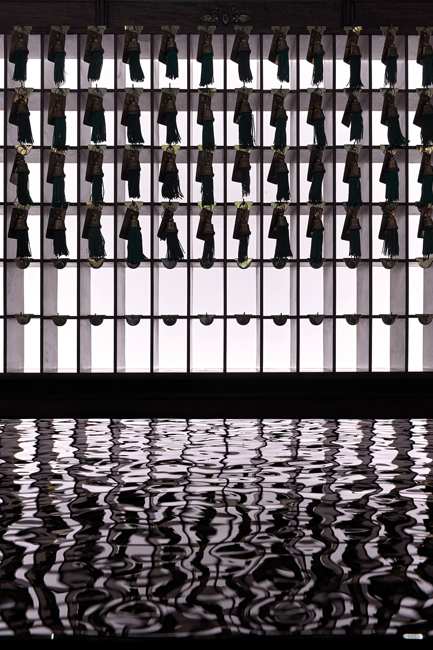 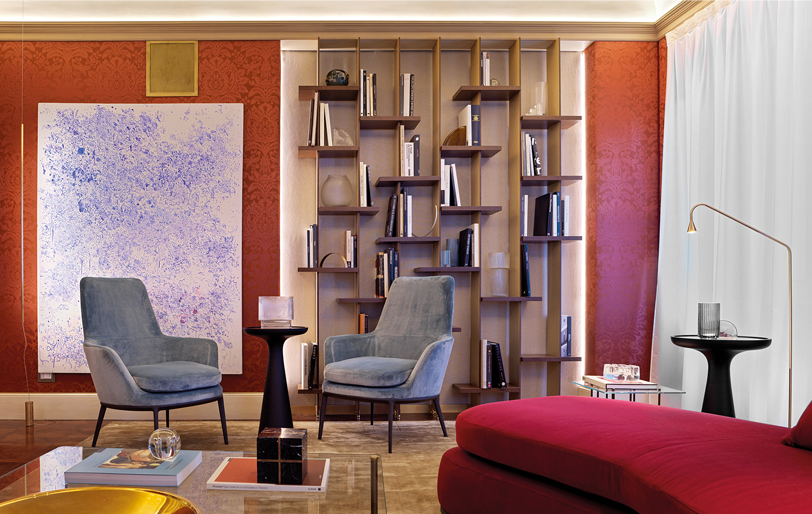 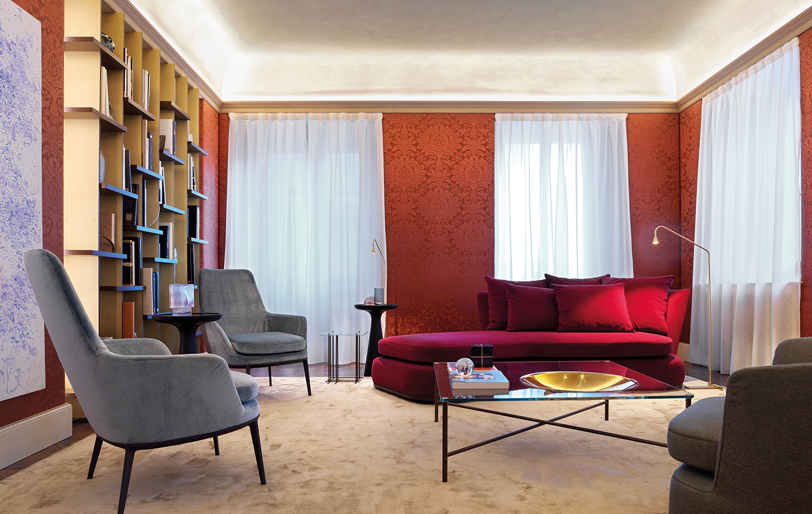 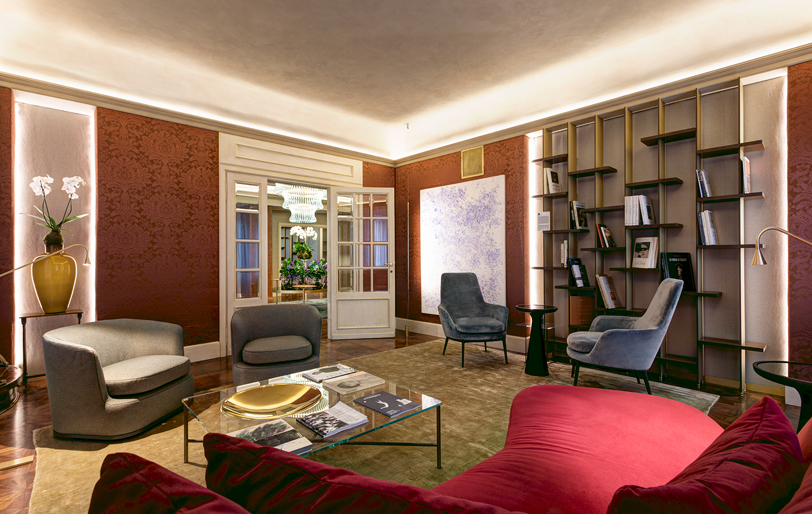 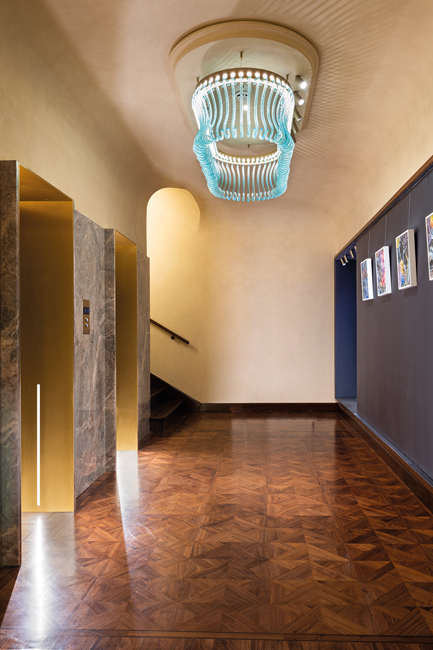 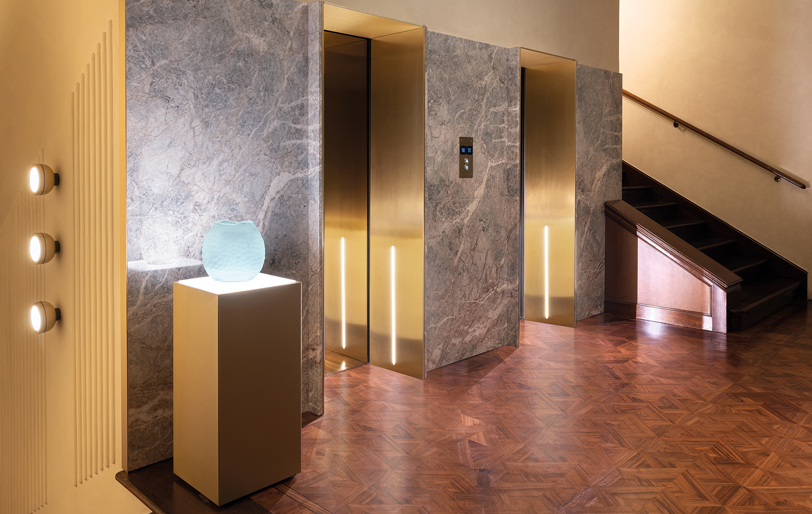 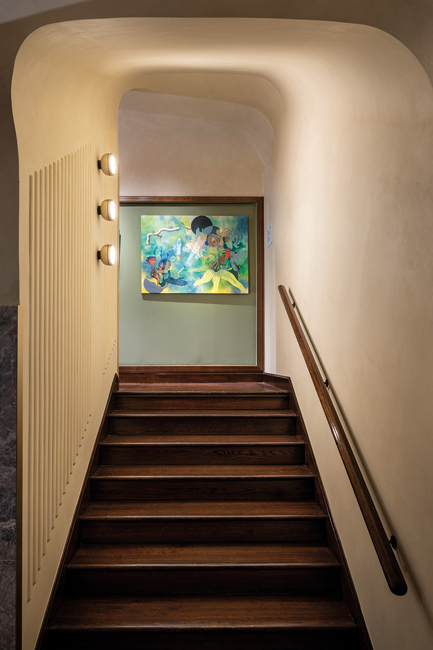 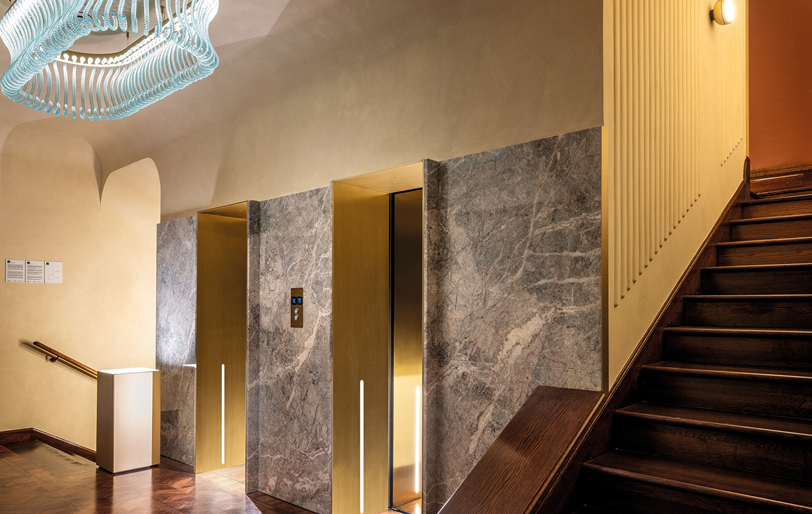 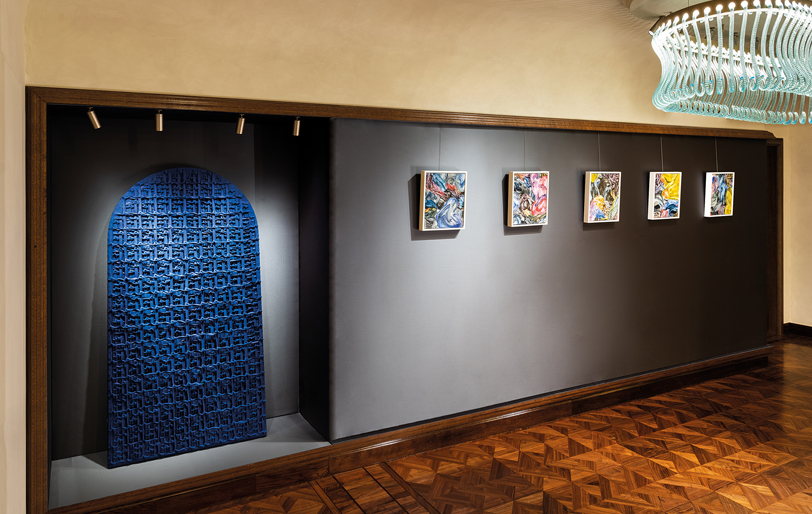 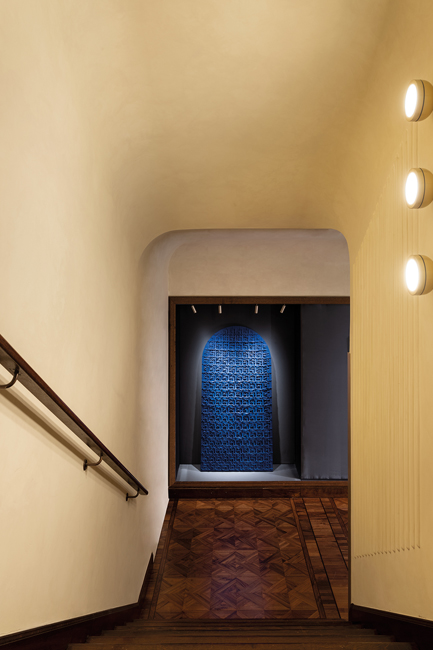 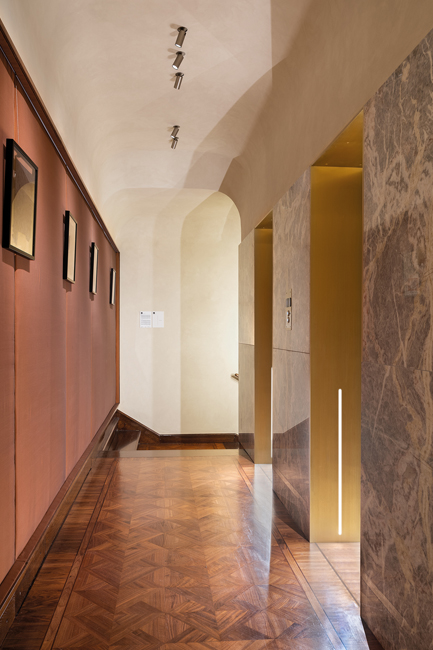 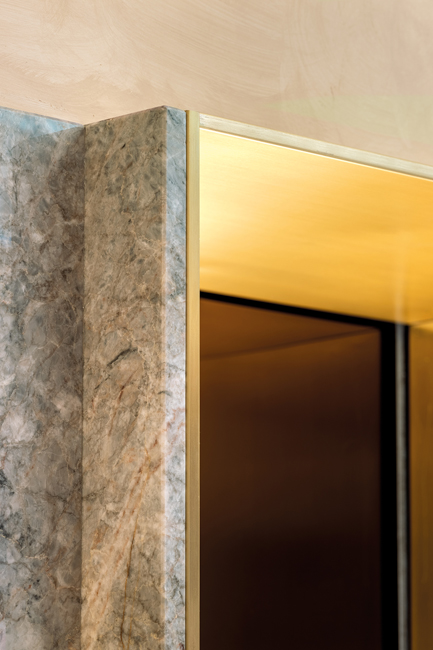