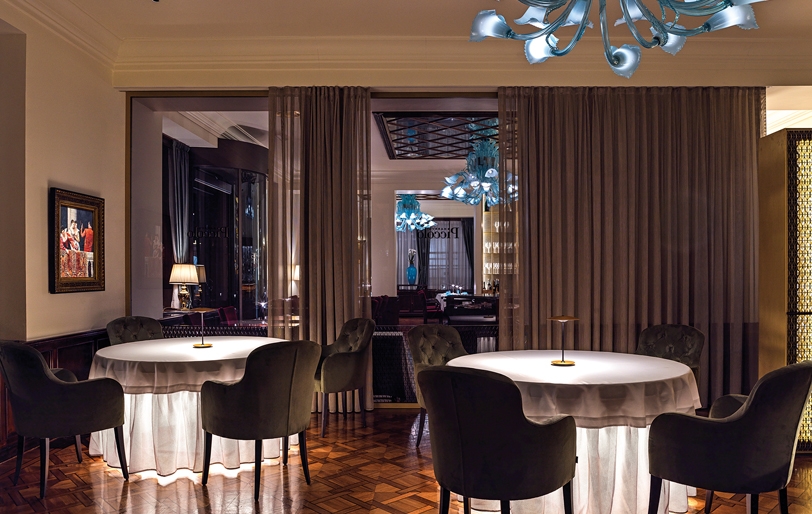 The refurbishment of the Michelin-star restaurant Harry’s Piccolo and of the café Harry’s Bar was the first project entrusted to the firm Egidio Panzera Architect by the Grand Hotel Duchi d’Aosta. The main requirement for the restaurant and for the chefs Matteo Metullio and Davide de Pra was to earn a second star and the spaces needed to be redesigned to accommodate a larger number of people.

Functional flexibility of the spaces was one of the guidelines of this project: a large hall brings together the star-rated restaurant and the bar during breakfasts and corporate or private events while, in the evenings, the spaces are separated to enclose Harry’s Piccolo guests within a more private setting.

The architect Egidio Panzera created two large brass glassware cabinets on the sides of the original counter of the Cipriani bar, seeking the symmetry that had been lost, and that now greets guests as they enter from Piazza Unità d’Italia. A lighting system “scatters” the crystal glasses on the shelves, thus enacting the sparkle of foregone glories.

Two large sliding walls of gray glass meet behind the glassware cabinet to the right of the counter, opening or closing off the space as required. The two slightly reflective glass panes bearing the Harry’s Piccolo logo and the two Michelin stars — indeed obtained — conceal the interior of the restaurant, together with curtains featuring bronze highlights.

The dining area of the Michelin-star restaurant Harry’s Piccolo had to be characterized by particular elegance; the architect perceived the theatrical nature of Piazza Unità D’Italia, with building facades forming the backdrop of a set design that is unparalleled throughout the world. In this setting, he envisioned the elegant motion of twirling ballet dancers, who would play the leading role in the space. The ballerinas are the restaurant tables; the softly backlit long tulle skirts make them float and spin in an atmosphere that is both poetic and seductive at the same time.

From the space, the firm removed all the light sources and objects above table height, creating an imaginary horizontal line connecting the chefs’ creations on the tables, the window sills, and the square. This trick, which lends precision and minimalism by day, also emphasizes the stage-like effect of the illuminated tables by night, projecting the space outwards and making it shine with the city lights entering from the large windows.

As always, special attention was paid to the details. These include the use of profile spotlights to illuminate the paintings and the brass-plated metallic textures used to cover the furniture in these spaces, which recapture the metallic patterns on the Harry’s sign out front.

The hues of the curtains match the original crystal chandeliers while, around the tables, the cozy armchairs comfortably seat guests so they can initiate their taste experience. The original chiseled parquet flooring was reconditioned and subtly reflects the light of the ballerina tables.

The Club dei Club, which was originally a lounge in the hotel lobby, has been incorporated into the restaurant. While the double-height square-front space is permeated by the magnificence and elegance of the historical buildings, the Club dei Clubsought warmth and intimacy to make guests feel protected and pampered.

While wishing to retain a classical atmosphere, the firm worked by subtraction and with surgical precision to achieve alignment and a more polished contemporary style. A wooden cornice connects the windows and doors to the perimeter of the hall, concealing a built-in light source that softly brightens the connected ceiling.
The cornice is also a feature separating the walls and ceiling. The walls are clad in a stretch of brocatel fabric, made in accordance with the artisanal tradition of this area by the Venetian weaving workshop Bevilacqua. The ceiling has a classical smooth texture resulting from the skillful use of veiling, an ancient local wall treatment.

The final operation was the restaurant bathroom, which became one of the project’s gems. Completely redesigned, it took its cue from the colors and reflections of the Trieste Gulf in summer. The walls are clad in reflective panels that mirror the green color of the Adriatic Sea. The ceiling is astonishing with its deformed steel sheeting, whose reflections take on the form of rippling waves and light bouncing off the sea. A mosaic floor and Neoclassical furniture create an environment that’s in harmony with the hotel while also modern and innovative. 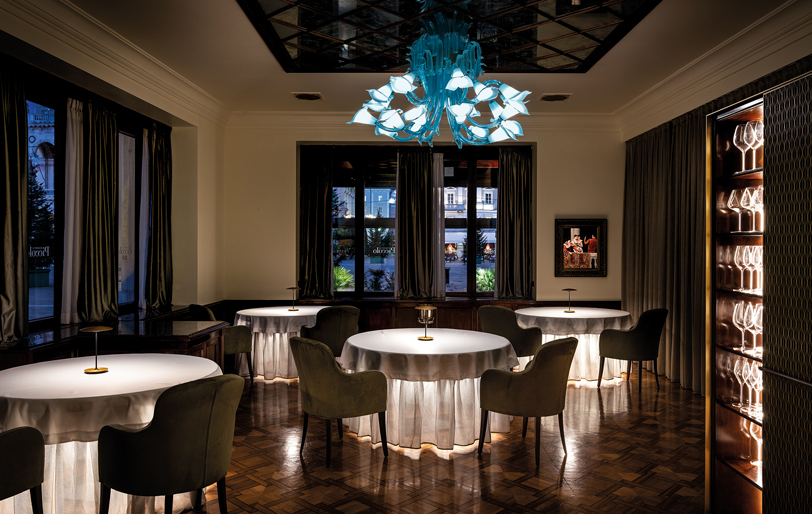 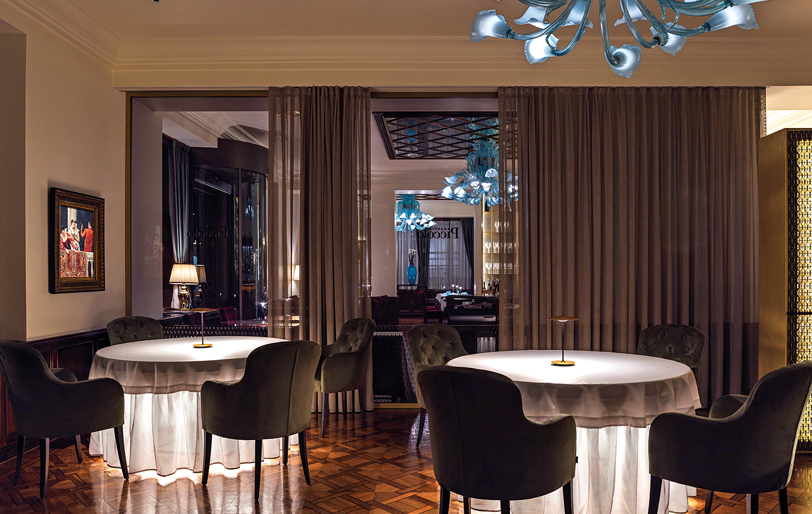 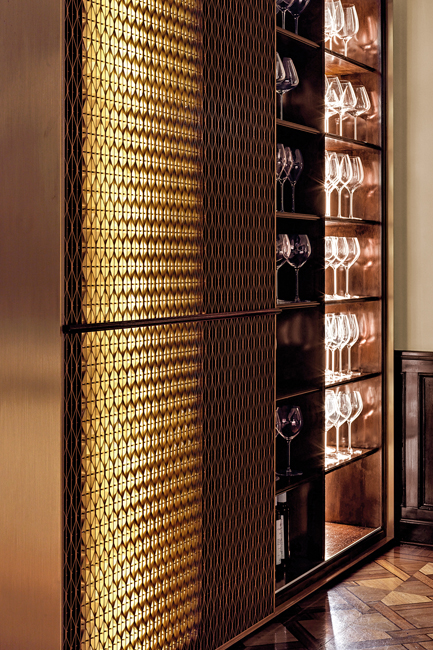 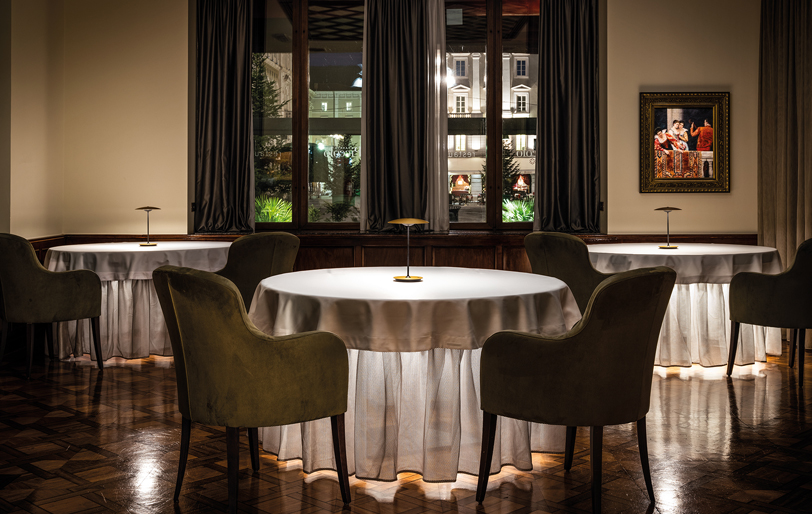 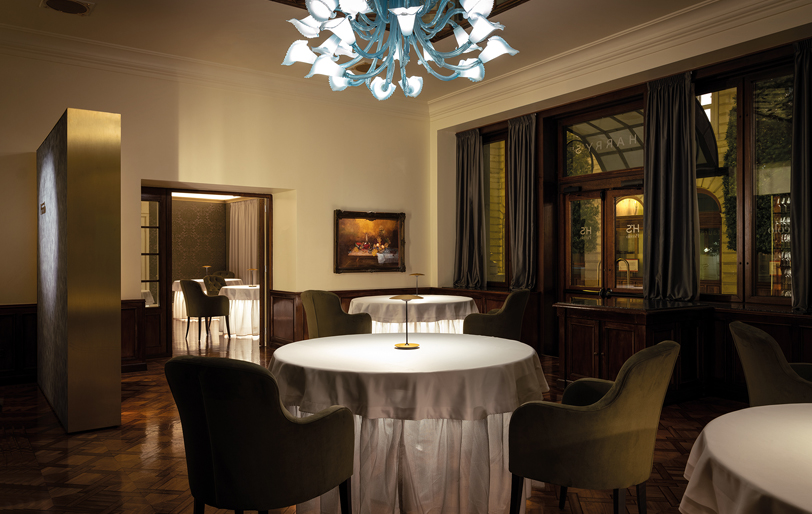 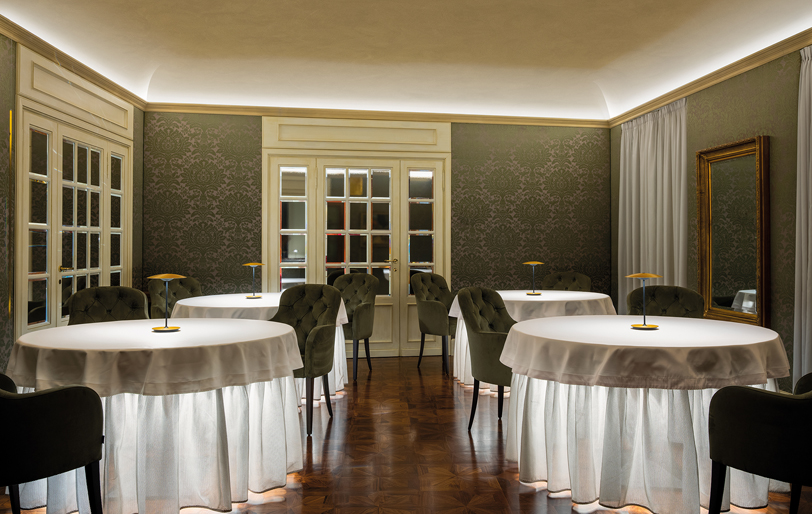 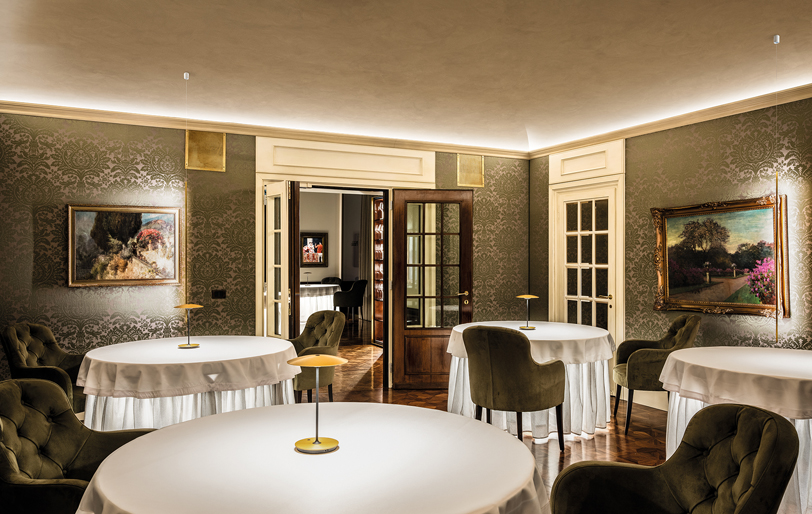 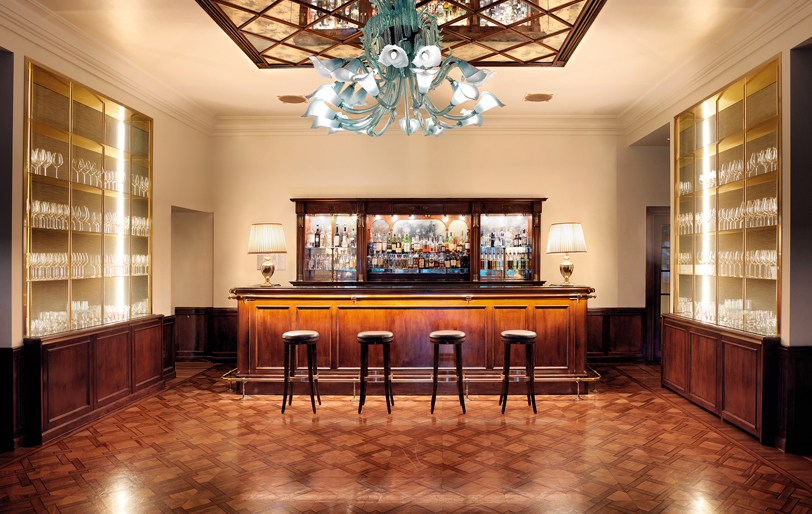 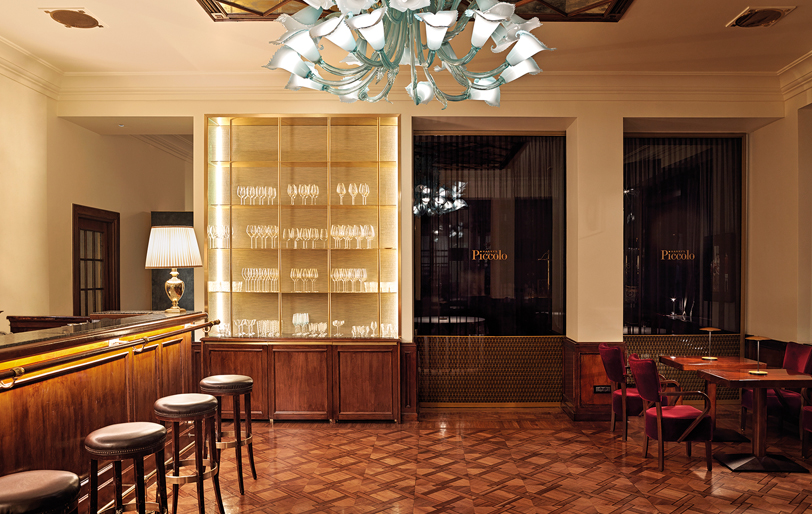 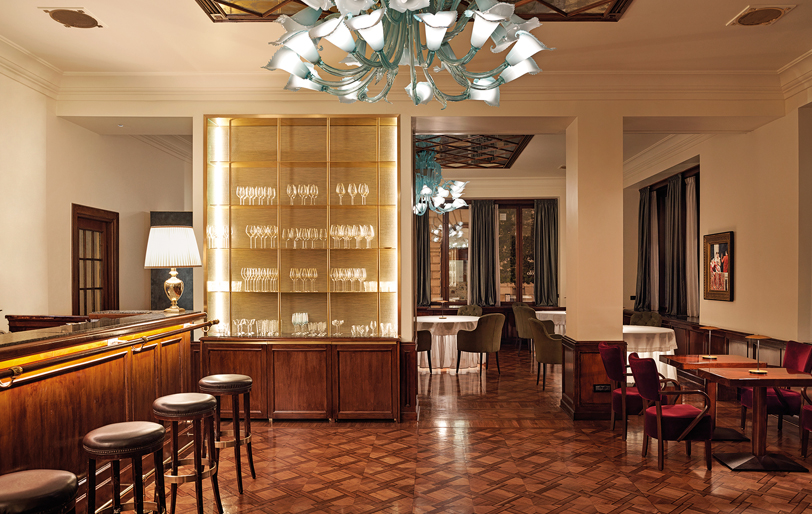 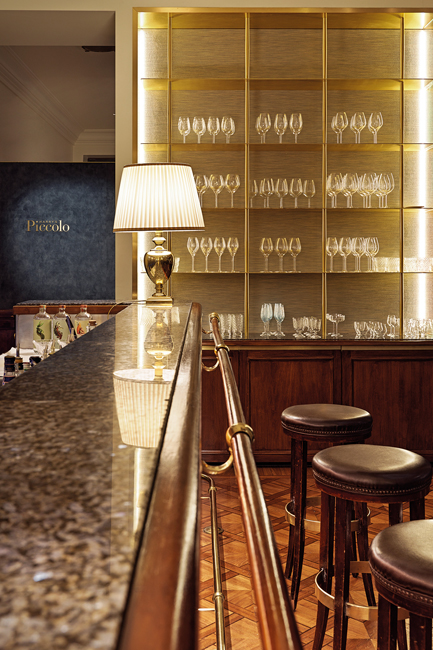 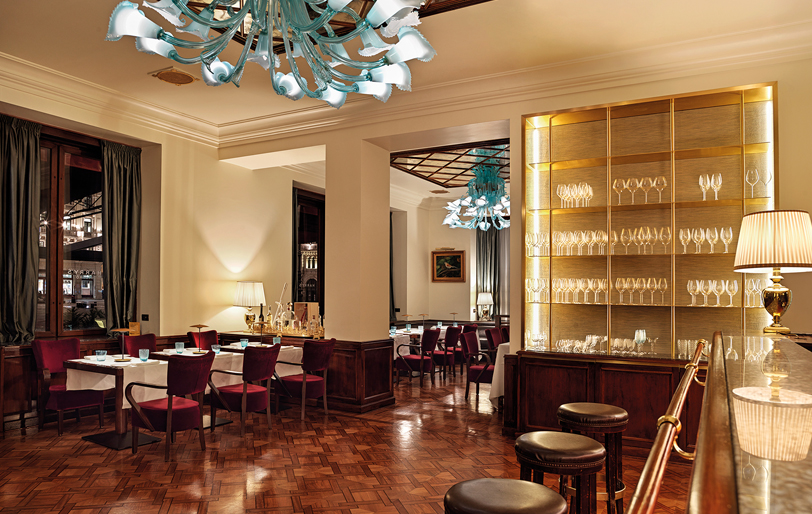 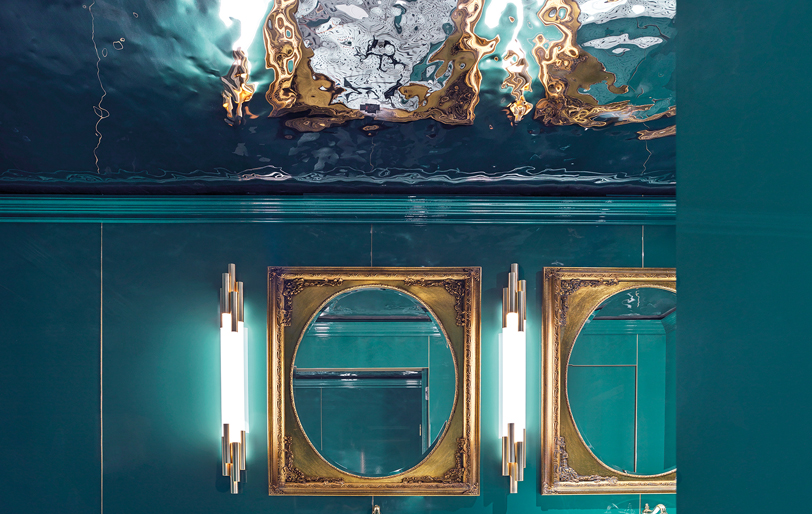 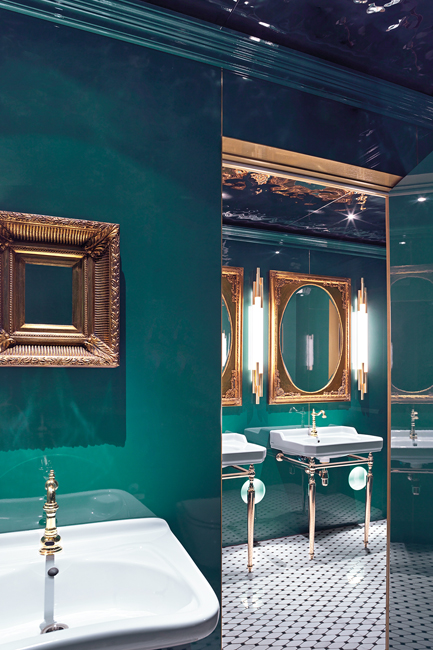 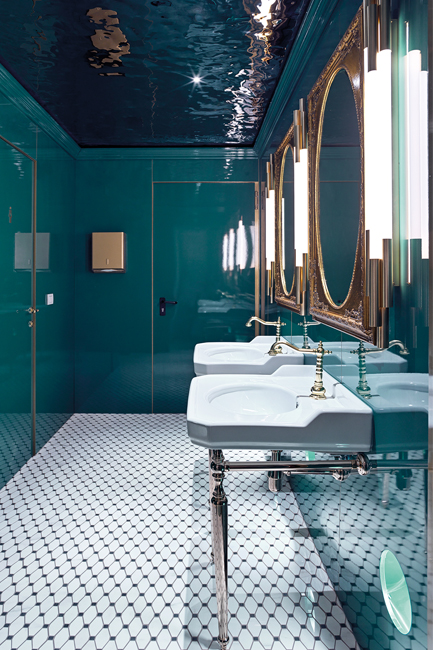